Due to issues, the HTML version of the game has not been updated to the latest version (v0.3.0) on itch.io. The updated HTML version can be played on Newgrounds, but you can also download the Windows version here as well.

NOTE; This game is very early in development, a lot of things might change maybe. Let me know if you have any issues. Also, if the game runs too slow for you, try disabling VFX and the HUD in the options in the main menu, or download the Windows version of the game (which even includes keyboard/gamepad mapping and other options)

UNITRES LUCID is a 2D arcade platformer created by Unlimited Trees. It is recommended you've played 'TREES' ADVENTURE' or 'UNITRES Dreams' before playing this.  This prototype features 14 test levels as well as various extra modes.

SUPPORT THE GAME ON PATREON

PLAY THE DEMO AT NEWGROUNDS

Each level has 4 'ROUNDS'. In order to complete each round, you need to collect enough 'Stars' and 'Star Rings' to fill up the bar on the top-left of the HUD. After doing so, an object will appear which, when collected, advances you to the next round (as well as awarding extra Score and Time when collecting more Stars/Star Rings). Completing all 4 ROUNDS will reset the level back to ROUND 1.

In the normal Score Attack mode, you have a timer which begins at 120. Once it reaches 0, the level ends.

The movement is the same as 'TREES' ADVENTURE', so it is recommended to play that game's demo before this game. The main difference is the way slopes affect the player's speed. Running down a slope will speed up the player, whille running up a slope decreases your speed. Slopes will affect you greater when sliding, so keep that in mind. Slopes also affect your jump, where generally jumping up a slope will give greater height but less distance, while jumping down a slope gives less height but greater speed. Lastly, landing on a steep slope will transfer your falling speed to your running speed. Overall, the environment can really be used to move around very quickly. The environment is your friend.

There are various enemies which will try to stop 'Trees' from progressing. In the normal Score Attack mode, being hurt by an enemy takes away 5 seconds from the Timer. Enemies can be stunned up to 3 times by attacking them, however the only way to defeat them is to collect a Powerup. Shielding will protect you from an enemy's attacks, however you will be stunned for a moment and will be knocked away.

As mentioned before, collecting more Stars before ending a ROUND will increase the Score Bonus. Try to collect as many Stars as you can, while making sure you don't run out of Time.

Directional Attack (Inputs for Right Stick on a controller)

Very Special Thanks To

Shout Outs to My Crazy and Cool Patreons

The game is cool because 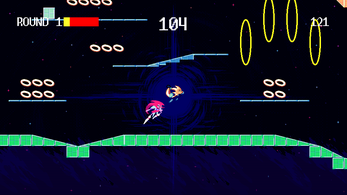 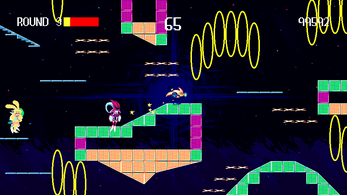 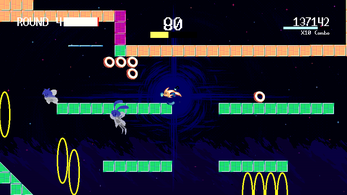