A downloadable game for Windows

UNITRES Dreams is a free, experimental pixel 2D platformer created by Unlimited Trees with inspirations from games on the Megadrive/Mega CD. It involves a group of friends going on a wacky adventure to get home, having to traverse bright, colorful environments in a strange dimension. The game's soundtrack was composed by RRThiel, A-S-H, Scooblee, CosmicGem, Mr.Sauceman, [c], MiniMacro, Crash, littlelamp100, Woofle,  Lange, MegaBaZ, SoundCirclet (dante) and R3tronaut. However please note that most of the sound effects and a certain music track do not belong to us.

Originally, the game started life as a tech demo for a future project. This game was made in Construct 2 and is completely free to download. Currently the game is available for Windows, though I may release other versions as well.

The game includes 3 separate campaigns with their own levels and story, which include:
-The "Dream Campaign", the main campaign with 4 levels, each split into 2 sections.
-The Original Campaign, which contains the first ever level made for the original tech demo.
-The "ULTRAMEGA Campaign", which contains multiple challenging levels, 2 of which being based off the game "MEGAMAN PERFECT BLUE", a fan project lead by RRThiel.

I hope you enjoy this game I have spent the past year and a half creating. It was definitely a great learning experience for me, and I hope you'll continue to support my work when I begin creating my next big project.

(The current version is v1.0.1. Please let me know any issues you may have with the game)

Unzip the .zip file, and then open up the folder.

Then run "UNITRES Dreams.exe". Make sure to read the "README.txt" file for controls and other information.

I really liked the game, has a lot of charm to it, so many neat touches in the game to the dialogue and the large assortment of effects its really high quality, it's a game that's worth full price.

The Mac Port & Linux Port will be the same thing as the windows port , Right? or will it be different

can u release the game for mac?

I'm considering releasing versions for Mac and Linux for the next release of the game (which I'm planning to include minor fixes and some extra content) but I have no way of testing it, so I don't know if I will.

This entire game is just a shitpost down from enemy explosion, to the abysmal dialogue. If you can even call it dialogue. First off, why is there such a difficulty curve after the first level and boss? And also, why did you not add invincibility frames? It's hard when enemies are endlessly throwing out projectiles, and you get hit multiple times. You can't even move out of the way because your controls get locked when being hit. That's stupid coding. Oh, and about the bosses. Most of them can boil down to them spamming projectiles with little-to-no room for safe spots, and hitting them when they're done spamming. That's shit boss design and it's shit coding. Speaking of coding, that's SO MANY bugs to find with the latest 1.0.1 build, mainly being weird or out-of-place enemy hitboxes and collision issues. Also, I hate how you set up the controls for the player. Why do I have to use the attack button to run, instead of adding a run button? This could lead into situations where either I launch myself into projectiles, or down a bottomless pit. Speaking of bottomless pits, there's a shitload of them too, and near the end of the Dreams campaign. This is worse level design than Dimps and the Sonic Advance series, and people love hating on Dimps. The level design was obvious made for a Sonic fangame, but the physics just doesn't compliment it. I'm stuck at the boss with Lover, and there doesn't seem to be a way to defeat him. He doesn't spawn in the arena, and all I'm left to do is just keep avoiding his attacks. I'm still in the Dreams campaign. I can't wait to see what the other two campaigns have to offer. I may need to edit this post with those criticisms. With all that being said, good graphics(aside from the dialogue portraits) and music isn't going to save a poorly-coded game.

Visually impressive, but the level design reeks of "where the fuck do I go". The Dream Campaign's gameplay doesn't encourage much outside of finding the path forward, and there's little incentive to fight any enemies as they pose no threat besides sucker punching you as you get bounced around like a pinball all over the place. This made it difficult for me to bother taking in what's going on, as there's usually too much happening on-screen to process any of it. Also the shoot'em up sections were monotonous and felt wholly unnecessary. I noticed a gift box that required 3 keys to unlock in the second level, but why would I want to waste my time bouncing all over a level with no clear landmarks to find these keys so I can see what's inside? To me it feels like a wasted secret, whatever it may be.

I made it to the second boss, LooneyMan, and stopped after dying to him thrice. Boss fights in general simply felt like it boiled down to slapping them constantly while avoiding their attacks until they die. LooneyToon seemed to do it the best since I wasn't able to properly process what was going on around me to effectively defeat him.

The Original Campaign fares no better. The criticisms regarding the enemies in the Dream Campaign carry over, except instead of sucker punching you they do...absolutely nothing, if you keep moving. On top of that, though, I don't get why your horizontal movement would be reversed when you switch gravity. The first and second bosses have a wide gap in difficulty: the first was piss easy while the second boss threw so many things at you I gave up trying to figure out how to properly fight it. It also killed me in one shot with an attack so that helped soured my desire to defeat it.

I decided I saw enough of what the game offered and didn't bother with the ULTRAMEGA campaign.

The writing is middle school level stuff where it tries its hardest to be "haha random fourth-wall breaking funny" and as a result comes off as overtly obnoxious. The mugshots here also look more like placeholders than proper visuals. This belies the rest of the game since it seemed to be a more serious thing. Maybe this is the intent, and if that's the case, it's most definitely not my style.

If I had to describe the game as a whole, I'd call it a shitpost. Its levels shit bumpers and springs to confuse your sense of direction, the bosses shit projectiles everywhere that it's hard to determine where it's safe to stand/jump, there's a lot of shit to collect that effectively only bolsters your limitless healthbar, and the character dialogue and story scenes feel like one.

At least the visuals (mugshots notwithstanding) and music is nice.

i like the art but the gameplay can be very rough and stinky. sometimes things happen too fast that my undeveloped brain cant even process what is going on in the world of my pc screen. it feels like the levels are designed like a sonic game but your character's moveset does not mix with it well. maybe the levels should be slower and linear. however i only played the game for 15 minutes because the 2nd boss is too difficult for me. i think what i played was okay, but it was just overall extremely crusty and janky. also please fix the character going offscreen in the trees boss i beg thee

Unlimited Trees,this is a guud game,i love the gameplay,the artwork,the Dialog and the story yet simple,but it is very great.The gimmicks are pretty guud,and the game is pretty well coded,congrats on releasing this game.And I hope that your game developer journey goes on

you did a good
(sorry i dunno how to do reviews)

im the only one who upvoted you you did a good

Tried this out with a friend cause the graphics looked really pretty. The backgrounds are colorful and have a nice color palette. I'm familiar with the musician RRThief and his music is pleasant here as well.

I've played some Sonic games before (1-3+K, CD, Mania) but I can't say I'm super into them, so maybe my opinion isn't all the good, but I found the levels sort of a clusterfuck. I just felt like I was being bounced around constantly and bombarded by random enemies. I wasn't really sure where I was going or taking in anything or wanting to explore. As pretty as the levels look on their own they don't read that well. I got to the end boss of the second level, the looney dude guy, and died about 6-7 times before quitting. Having to get up close to a target that spams projectiles is a bit too much for me.

I also find the dialogue and cutscene art a little weird? I'm fine if a game isn't taking itself seriously and this is a test and all, I was bit let down cause the rest of the art style seemed polished. The humor isn't my cup of tea, so I don't know if that's planned for whatever future project it is.

There's some other odd issues here and there, like the shoot em vehicle getting stuck and falling below the camera, but since this says it's a test project, and again is free, I can't pick at it too much. Maybe I just need more time with in the future and could give better constructive feedback, but it feels very rough for myself. 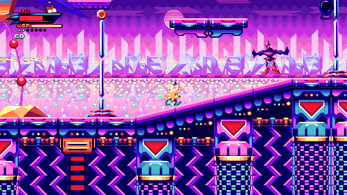 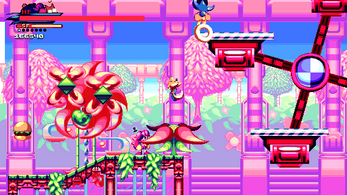 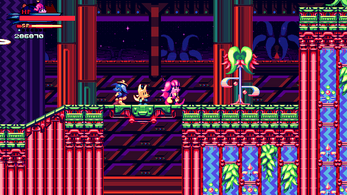 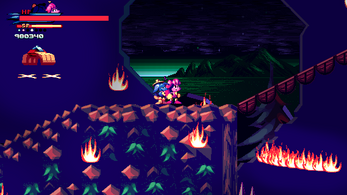 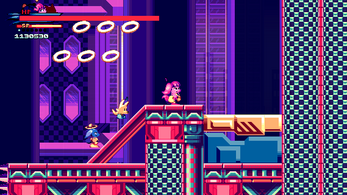 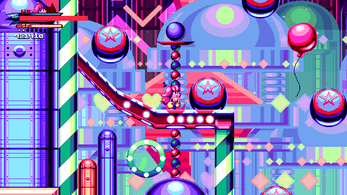 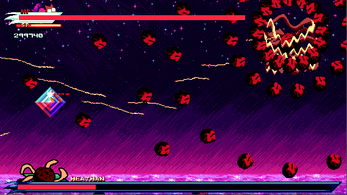